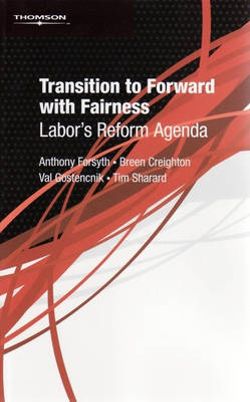 The newest commentary on workplace relations, Navigating the Fair Work Laws by Forsyth, Gostencnik, Parker and Roach, published in November 2010. Consequently, the price of Transition to Forward with Fairness (2008) has been significantly reduced. Buy now to get a useful commentary to a complex period of legislative change at a great price. In 2007, the ALP’s election promise to get rid of Work Choices was a key element in its victory over the Howard Government. The hallmarks of the new government’s IR policy were the phasing out of AWAs and reform of unfair dismissal laws. The legislation which achieved these and other changes was the Workplace Relations Amendment (Transition to Forward with Fairness) Act 2008. Transition to Forward with Fairness: Labor’s Reform Agenda by Anthony Forsyth, Breen Creighton, Val Gostencnik and Tim Sharard is a practical guide to these significant transitional arrangements, the full implementation of which was not complete until early 2010. This book, published in 2008, has ongoing relevance as a useful guide to a turbulent phase of workplace relations change.

Law, IR and HR practitioners and students will continue to find its clear discussion of complex legislation and policy change very helpful when dealing with the law of that period. Contents Introduction; Abolition of Australian Workplace Agreements; Individual Transitional Employment Agreements; Collective Agreements; No Disadvantage Test; Modern Awards; National Employment Standards; Other Measures To Implement Forward with Fairness. New Related title Navigating the Fair Work Laws by Forsyth, Gostencnik, Parker and Roach is a comprehensive guide to the key aspects of the Fair Work system. This valuable tool for legal, IR and HR practitioners and students combines a topic-based approach with detailed cross-referencing to relevant legislation and case law. Its clear structure and writing style makes it a useful aide to a system that can be both technical and complex. (November 2010) This text works well as a companion to the current legislation, Fair Work Legislation 2011.